Skipping all the books I read and didn’t blog about…

Last week I finished two of Neil Peart’s books: Ghost Rider: Travels on the Healing Road and Traveling Music: Playing Back the Soundtrack to My Life and Times.  Read ’em one after the other, and they’re good.  He’s an entertaining prose writer and one of the best travel writers I’ve read.  You can read about his more recent travels at his “slow blog” News, Weather and Sports (I hope that’s a permanent url).

Aside from the travel writing, he’s developed a language to describe the inner workings of the human soul. I need to go back through these books sometime to copy those parts, since I have great trouble translating all that internal stuff into words.  He and I share some internal weirdnesses, too, and it was a bit of a relief to read someone who can identify and describe them.  He does it in an easy offhand way with the ideal words and insights to capture their feel and taste.

One caveat for us Catlickers: he’s a devout and militant atheist.  You’ll roll your eyes once in a while.

Maybe I’ll post something about each book I’ve read.  First up: Moonwalking with Einstein by Joshua Foer.  A journalist covers a memory competition, gets talked into competing in the next year’s competition, and becomes the reigning American memory champion.  This is an entertaining introduction to the ancients’ memory techniques, centered on the concept of the “memory palace”.

The great modern books on ancient and medieval memory are:

The three ancient sources are:

Learning how to behave toward the gods, in daily piety and ritual, and how to negotiate the incursions of the divine into the human—from interpreting oracles and portents to facing the presence of a god in disguise or in epiphany—all of this tests and defines what it is to be human. –Ralph J. Hexter, A Guide to the Odyssey: A Commentary on the English Translation of Robert Fitzgerald.

So what’s up with the snakes in this photo of Mar Gregorios? I’m glad you asked.  Here’s a great essay on the Christian iconography of snakes. And, of course, see Maureen O’Brien on the same subject. 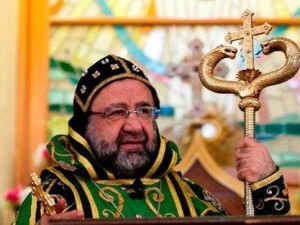 I just discovered Joe Henry‘s 1999 album Fuse – it’s currently on perpetual play in my office and in the van.

Nowadays you kids have websites and videos, but back in the olden days the ancient ways were handed on via email. From the archives of a mailing list I was on back in the ’90s:

“As far as I can tell, the palm should be “fresh,” meaning that you probably should do this when you get home from church on Palm Sunday. Pat and I debated whether crosses could be made with palms a few days old (and drying) and soaked in water to limber them up. Anyway …

Split the palm lengthway. Typically the palm is “hinged.” Split it at the hinge. You should have two long slender palms. Take one.

About one fifth up from the broad end (the bottom), fold down. Take the longer of the halves and fold up and to the right about a third from the first fold (now the top). With this second fold, you are forming part of the crossbeam.

You are now going to make the third fold, and thus the length of the crossbeam to the right. Find a point on the palm facing away from the cross (from that second fold) that is about the same distance from the center of the cross as is the top part of it. Fold to bring the palm back toward the cross and forming the crossbeam.

Should should have a couple inches of very thining palm remaining. Take the remaining palm and thread it in and around the layers in the back (much like taking thread and weaving it in and out of itself when sewing, to finish it off.). Flatten it out, take any kiltering out of the cross and you should have the finished product.

I hope these instructions made sense. I’m a communicator by trade, but I am very accustomed to having visual aids present!

I’m reading through her writings for the Catholic Worker in chronological order from January 1, 1933.  I last turned my attention to her when I was a college Republican in the 1980s and I’d filed her under “crazy radical”.  Turns out she wasn’t crazy at all.  It’s exciting to see her Catholic orthodoxy mix with and ferment her social radicalism.

And the Word was made flesh, and dwelt among us. —St John of Patmos